on February 11, 2012
Turns out that I quoted my lovely wife the other day in an interview with a journalist.  For years, Kris has said that Chambourcin tastes like millipedes.  In general.  Not all Chambourcins, just the ones that are over-cropped (and by that I mean, more than one cluster per shoot.) 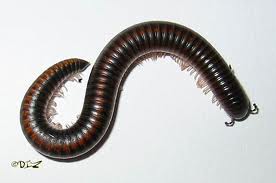 Now, I'm not sure what she means by "millipedes" since it would seem to imply that she has tasted one.  But just like I have never licked wet concrete, I still can relate to that character in wine.  I suppose she is doing the same thing.  But millipedes?  Suffice it to say that this was a memorable read for some people.  On top of that, I know what flavor it is in Chambourcin that she is referring to.  Whenever she says a Chambourcin tastes like millipedes, I usually say, yes, it does taste like Chambourcin.  (It's part of the flavor profile of Chambourcin that I struggle to minimize in my winemaking.

Anyway, it turns out, she can smell millipedes in a room.  Always has.  I know, I thought she was crazy, too.  So, we started investigating what millipedes might smell like.  Here's a passage from my favorite cloud-sourced knowledge base (Wikipedia):


"Many species also emit poisonous liquid secretions or hydrogen cyanide gas through microscopic pores called odoriferous glands along the sides of their bodies as a secondary defense.[8][9][10] Some of these substances are caustic and can burn the exoskeleton of ants and other insect predators, and the skin and eyes of larger predators. Animals such as Capuchin monkeys have been observed intentionally irritating millipedes in order to rub the chemicals on themselves to repel mosquitoes."

Hydrogen cyanide might be one of the secretions that she is smelling.  Now, that seems like a toxic chemical, and in no way am I implying that Chambourcin has anything toxic in it.  (Although some French authorities and New York's own vinifera pioneer Konstantin Frank used to claim that hybrids caused cancer--a claim that is pretty ridiculous.)  We decided to delve into what this "hydrogen cyanide" substance from the millipedes might be.  Again, it seems that it only causes minor irritations to humans, and is in no way harmful to humans in any significant way.  But then we stumbled upon this (also from Wikipedia):


"HCN has a faint, bitter, burnt almond-like odor that only some people are able to detect owing to a genetic trait."  Ah ha!  So, my wife isn't crazy, she's just a freak of nature.  (Turns out her brother can also smell these creatures.)  Me, on the other hand, can't smell the damn things at all.

But it makes me wonder, first of all, if this is actually the compound that she is smelling, and if so is it actually in the wines themselves.  And, secondly, is it the part of the wine that people object to (including myself.)  Lastly, why is it in low-yield Chambourcins, rose-styles, and port-styles that this flavor profile is less prevalent?  I don't know, and I think I may have just added to the mystery of it all.  But it does make for an interesting story.

Full-disclosure: I do make Chambourcin as a winemaker, and I make it primarily because it sells.  I think it's true calling lie in either a Port or rose-style wine, or perhaps a southern French tank-styled red.  I think it's an important part of the grapegrowing landscape in this part of the world, just like it is in Beaujolais where it makes up a lot of the vins de table and vin de pays wines in France.

But when it comes to making a name for ourselves on the world's stage, I think I'll stick with my Cabs and Merlots....

By posting on here, you are guaranteeing that what you say here is worthwhile and worth saying. And something that you would say in the presence of your mother. If not, I will be forced to remove it. 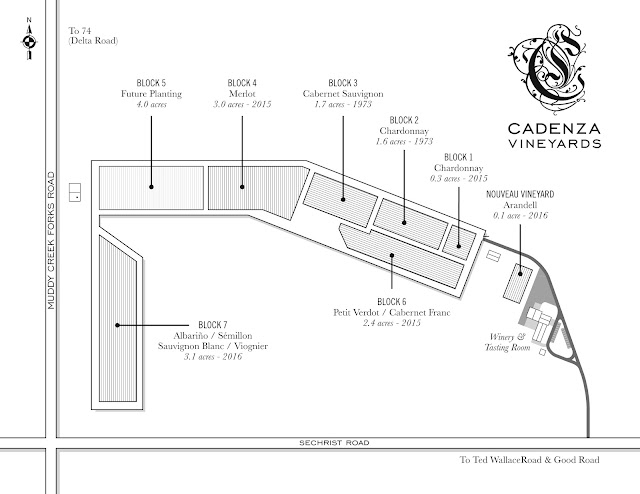 If there was one question I was asked more than any other during our December Cadenza wine club pickup, it was this: "why aren't there more reds?"  Believe me, it's not a fun question to answer.  I understand that most of you probably signed up for the club based on the red wines that were promised.    It's probably best for me to try to explain the past few years, and in order to do that, I should talk about our vineyards some more. Here's the map. Map of Cadenza Vineyards in Brogue PA We have four red Bordeaux varieties planted here.  Theoretically, I could see us making no more than six wines in a perfect year: Cabernet Sauvignon, Cabernet Franc, Merlot, Petit Verdot, Bridge, Cadenza.  That said, none of the past few years have been perfect. 2017 was the first time we had all four varieties online at the same time.  And we released three wines (Merlot, Bridge, Cadenza).  This was a great harbinger of things to come (or so I thought.)  Given the fact that t

Hey, if you're reading this thing because the crap I write actually interests you, then thanks! If you're doing it to kill time, then I can think of a whole lot of better uses than this. Heck, I don't even get a sympathy read out of my own mother for this thing.... But if this stuff does spark some thought in your gray matter, why not make a comment on it? I sometimes feel like I am sending thoughts into the inter-nether-world, until someone prods me with a thought. I know that there are a lot of folks out there who think that the goings on in a winery and vineyard are fascinating. In fact, I'm one of them. It's why I write the blog. (Also as part journal, because my memory's awful.) And most of the time I don't know what I'm talking about. Of course, that's in the big picture. Most of my colleagues don't know what they're talking about either. I just happen to admit it. The idea of growing grapes and making wine for a living is